Musings on RiversWest beginnings, and connected Nymphs
by Bob Young 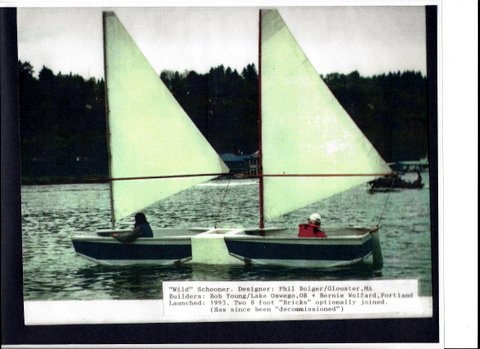 In 1990 Bernie Wolfard and I (and others) got this wild idea to follow Phil Bolgers challenge and use his designed "connection" to fit two Nymph dinghies together. I had just built one Nymph for a friend and Bernie already had one. So we built the "connection", connected the two boats, hoisted sails and there we are in the picture. Actually the "craft" sailed quite well -- both individually and connected. It was fun. After proving we could do it the two boats went their individual ways.

I should mention that Bernie Wolfard was a special kind of guy. As you may know he was in a wheel chair paralyzed from the waist down. This the result of a hang gliding accident in South America. Bernie was a wild type that would try anything. He skied, swam for records, drove wild cars. He graduated from the U of Oregon and was very active there. Bernie and met at an early Portland Boat Show up at the Forestry Center where he was exhibiting his first boat -- the Bolger 14ft. yawl (name ???) with sleeping accommodations and outboard motor as well. I don't know where Bernie is now. He was in North Carolina and had gotten deeply into radio controlled airplanes.

Bernie was the second President of RiversWest and the two of us were the main drivers in getting RiversWest underway. Irv Jones followed Bernie as President.

Sorry for rambling on but I'm now 88 years old and I seem to ramble a lot these days (ask my wife). RiversWest is a very special organization to me and I truly appreciate the wonderful status it has maintained. All you guys do good work -- both with wood and with each other. I value receiving the honorary membership each year and especially having the invitation to drop by anytime.