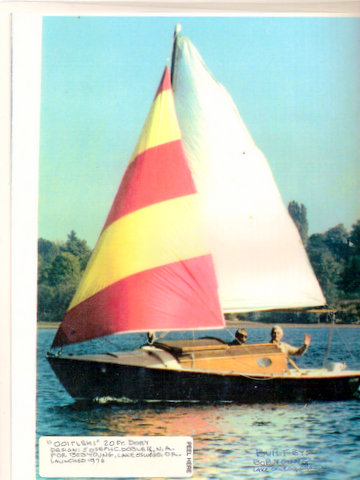 This dory was my "baby" for many years.  Sam McKinney (now deceased) was a one of a kind guy that loved the wilderness and the waterways.  Sam was a dear friend and we had many boating adventures together. While in sea going canoes cruising in Barkley Sound (Vancouver Island) for ten days, we together envisioned a small boat that would sleep two, be seaworthy, trailerable, and could be built by our kind of carpenters.

I learned of Joseph C. Dobler N.A. (retired aeronautical engineer at North American Aircraft, Cal.) and wrote him of our ideas. He responded and on a business trip to L.A. I met with him there. We agreed to proceed and in 8 weeks he sent us eight pages of very detailed plans. Sam started his boat first (built in his basement) in 1975 or so. I started a year or so later -- had to build a carport first.  We launched Sam's boat in the Willamette then several months later (vacation timing), trailered his boat to Nootka Sound on the west coast of Vancouver Island. Two weeks there sailing off shore for 15 miles to entrances further north.  Great, great trip that proved the boat.  Sam solo sailed his from Port Townsend to Desolation Sound then back to Port Townsend, WA.

With Joe Dobler I towed my brand new completed dory to Port Townsend, met Sam and there Sam loaned his boat to Joe Dobler. For the next two weeks Joe and I each sailed a dory up into the San Juans then back to Olympia where we met Sam (driving my old pickup to trail his dory home).  For ten years or so I sailed my dory here and there -- most often solo -- and now I have the memories because I sold the boat to a young Naval Architect in Seattle (who appreciated the qualities of the boat).