The "Hall Templeton"
A RiversWest Boat With a Noble Name
By Bob Young, August 2008 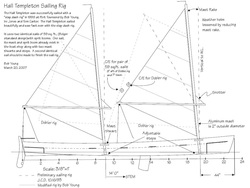 During the building of the RiversWest yawl boat, there was discussion as to a name for the boat. It was decided to name her “Hall Templeton” in memory of a man who loved boats and who helped a small group of boat builders develop the resources that have promoted boat building here in the Portland area for almost twenty years.

Hall Templeton was a boat person and a member of a prominent Portland, Oregon family.  Although aged, he still spent much time on the Willamette River rowing his 12-foot Whitehall.  In 1989, Hall visited the “Park Avenue Boat Shop”, a two year boat building demonstration set up in the windowed corner of the Oregon Historical Society building, on Park Avenue in Portland. It was there that Bob Young and others witnessed Hall’s interest in boats. When RiversWest was formed in 1989 and set up shop at the Oaks Park, Hall visited the site several times, in those early days. One of those times Bob Young mentioned to Hall that the next big effort was to equip the shop with electricity.  A few days later, RiversWest received a check for $500.00 from Hall, which made electrification happen much sooner. Some months later, Hall passed away at the age of 85 or so.

The “Hall Templeton” is a 24-foot yawl boat owned by RiversWest Small Craft Center, Inc. of Portland, Oregon.  Club members built the RiversWest boat in 1995 at the old Oaks Park boat shop location in Portland, Oregon. Joseph C. Dobler, N.A, designed it originally for a boat club in Marietta, Ohio. The term “Yawl Boat” is an old name for a simple but useful ship’s boat.  Its purpose was to serve the larger vessel by carrying crew, passengers, and limited cargo to and from shore. The RiversWest design emulates the yawl boats used to serve Mississippi River steamboats.

When some RiversWest members found the Dobler design, it was judged to be a very good boat for the club’s use. It also held promise as a candidate for a high school rowing program that was felt to be needed in the Portland area (and it is still a hope). It was decided that such a boat would be constructed in the Oaks Park shop as an instructional project as well. (It should be pointed out that the decision was not unanimous, but time has proven the worth of the project.)

On a vacation trip, Joe Dobler stopped by the Oaks Park shop and reviewed his use of taped-seam construction methods in his designs (he was one of the very first naval architects in the U.S. to do so). This was the method used when a group of RiversWest members, including Gary Pimm, Barry Freeman, Bent Thygesen, Bob Young and others, as they undertook the building of the yawl boat. For example, Dobler specified that the side planks (made from 4 x 8, ¼ inch plywood) be spliced using fiberglass cloth, rather than the traditional wood patch. Further, the design did not specify a wood stem. Rather, fiberglass cloth rolls were applied to the stem area to make a strong but simple stem piece. Dobler also designed a “No Pin Centerboard” system for the Hall Templeton. It proved to be a very clever design that eliminated the weaknesses of a standard centerboard pin below the water line.

The “Hall Templeton” has had some interesting experiences. One of these was in 1996 when Bob Young, Irv Jones, and Tom Carter trailered the boat to Port Townsend for the Wooden Boat Festival. For three weeks prior to the show, these three sailors, along with some club members, salvaged a trailer and added a cat-ketch sail rig to the yawl boat for the occasion.  (In the RiversWest archives, is a picture that Tom Carter took from his Pelican, of Irv Jones and Bob Young sailing – very well by the way -- at Port Townsend.)   One sail was from a borrowed Phil Bolger catboat rig, while the other sail was one that was lying around the boat shop.  The trailer for the Hall Templeton was salvaged from the back yard of Terry Cornelius’s home in Ridgefield, Washington.  It was pretty rusty, but again, club members pitched in, sand blasted it and then spray-painted it as well. Donated tires completed the project.  The trailer still transports the “Hall Templeton” today.