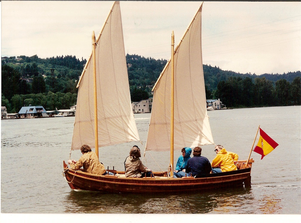 But how did it all start?  Twenty or so years ago how did a bunch of amateur boat builder "wannabe's" come to form a viable , productive boat building club?

It happened this-a-way: In early 1989 the Oregon Historical society prepared a very ambitious exhibit (curator was our Sam Johnson) celebrating the anniversary of the discovery of the Columbia River by Robert Gray in 1792 The highlight of the exhibit was the "Park Avenue Boat Shop" on the ground floor in front of a large window on the Park Avenue side of the OHS property. Over a period of two years three historic boats were built by a team of twelve volunteer builders. The American Jolly boat, the Spanish Launcha, and the English launch. All were all designed and building them supervised by a true craftsman, artist and historian Greg Foster of Gabriola Island, Canada.

How did this inspire RiversWest?  As people came to view the exhibit and the boat shop many would often say " I wish I had a place to build a boat". As comments like this built over time it became apparent that there was a need for people to have space and facilities to build their long dreamed boat project. Four people -- Sam McKinney, Bob Young, Bernie Wolfard, Sam Johnson, and Bent Thygesen  pooled their interest and talents to form the Oregon non-profit ("RiversWest* Small Craft Center") corporation in May 1991. (Note: The one word name "RiversWest" was conceived by Bernie)

Anyone who knew Sam McKinney knew he had a talent for dreaming big dreams. It was Sam who directed the RiversWest team to consider placing the planned boat shop at Oaks Park. Oaks Park is public, is centrally located and most importantly has a history of canoes and boats finding their way there for over many years.  Once identified a proposal was prepared by Bernie Wolfard and Bob Young and then presented to the Oaks Park Board at the Chairman's downtown office of Northwest Natural Gas. His approval was a "GO".

With the full (even eager) cooperation of the then Oaks Park manager Joe Norling a 25 ft. by 50 ft.,25 ft high open bay of a nine bay storage building was assigned to RiversWest. By now there were approximately twenty  ambitious and capable RiversWest members. Such people as Irv Jones, Tom Carter, Gary Pimm, Barry Freeman, Peter Wilcox, Dan Pence and dedicated 'others' added an outside front wall with a large sliding door and vinyl covered windows above the wall. A combination lock secured the space.

The space floor was gravel -- certainly not the best surface for building boats!  An inspiration from "someone" conceived the idea of setting down wooden pallets on the gravel then screwing a 3/4" 4 ft by 8 ft. plywood sheet to pallet boards. As each new member came aboard his joining fee ($35.00)was used to buy another sheet of plywood.  (Pallets were considered free because they were abandoned -- and still are -- everywhere.) In less than a year the entire 25 x 50 floor was covered and several boats were under construction.

About 1992 or so the adjacent 25 x 50 foot bay became available. A salvaged plywood wall was moved aside to then enclose a total of 2500 sq. ft. of space. The next big (actually huge) project was judged to be the replacement of the plywood floor with concrete. A talented and appreciated member, experienced in such a large project, managed the effort with members doing the heavy lifting. The effort went very well and proved to be very good. A  continuation of wall also completed and now enclosed the 50 ft. x 50 ft. space. Gary Pimm was a licensed electrician and an excellent industrial lighting system was installed under his direction. A large space heater was installed.  The new millennium now saw a busy, busy amateur boat shop with boats completed and beging built by members.  Bernie Wolfard built his Bolger designed, 24 ft. boat there. The design purposely accommodated Bernie’s wheel chair allowing movement bow to stern. Bent Thygesen was the major builder of the “Lake Oswego Pulling Boat” from plans prepared by the Center For Wooden Boats in Seattle. The Joe Dobler, N.A. design of a 24 Yawl boat  built by RiversWest members for club use and as a demonstration boat  to gain experience in lapstrake construction and for their use on the water.

Another boat that was built for RiversWest was the 24 foot yawl boat.

would be a good thing to do. (Portland could still use rowing competitions to balance with the Dragon Boat events.) Materials for the boat were provided by member contributions and building was a cooperative effort with Gary Pimm providing much of the work.

A long time Portland gentleman was Hall Templeton. Hall's family were well known for their forestry holding and the charity to the community.  Hall himself loved boats. In spite of a serious accident many years before when he lost his legs Hall would row his boat up and down the Willamette.  He also rowed from Portland to Astoria in his small, open boat probably several times.  When RiversWest was first formed and was beginning to build the Oaks Park boat shop the shop had no electricity. Bob Young knew Hall Templeton and invited him to visit the shop as it was being developed. Hall noticed that builders brought their own tools and materials but there was no electricity installed.  After his visit a check for $500.00 arrived in RiversWest's mail. The money was used to install the needed electricity.  To honor this man who loved boats (and was a friend of RiversWest the Board approved the building of the yawl boat as a RiversWest project. When completed Hall Templeton's wife and several  members of his family were guests at the launcing and the naming of the boat (the Hall Templeton). His name was carved in a name board and fixed to the stern of the boat. The "Hall Templeton" serves RiversWest faithfully now.

There are more stories of course. Stories about various boats and about problems of construction or obtaining materials and certainly problems about having enough funds to complete and equip boats.  For fifteen years all this happened with RiversWest members at the Oaks Park boat shop. RiversWest and the Oaks Park management ended the arrangement with good feelings all around.

When RiversWest was given notice by Oaks Park Peter Wilcox and other members did find some space that would fit needs. That space  is now located on the Columbia Slough in limited space but with acess to dock and moorage space.