​A big project at the Oregon Maritime Museum this year was the repair of the 32 foot main mast after the top couple of feet and the sheaves assembly came crashing to the deck in the Spring of 2017. There was extensive rot. With the help of Portland firefighters the mast was unstepped. Further inspection with an ice pick and moisture meter revealed rot or moisture intrusion in the upper half of the mast and at the base.

The mast never carried sail, it was for appearance (What is a ship or large boat without a mast? Unbalanced,  unfinished?) and to carry navigation lights indicating the steamer was  towing a vessel.  The cheapest and easiest way forward was to adapt a 32 foot aluminum flagpole.  But the continuous cylindrical shape and the clanging of halyards against aluminum in the wind would be wrong.  Michael Neubauer, a professional Boatwright from Port Angeles, WA, was on one of our 2017 cruises.  He sketched out some ideas and elaborated on mast building techniques in subsequent emails.    Specifically he proposed connecting a new mast segment to the old using a swallowtail scarf joint.  His wisdom gave me the confidence to proceed.  Rivers West member and boat builder Ralph Cohen suggested the ultimate guide that I needed; the David Macintosh book ‘How to Build a Wooden Boat.’ Its 15 page chapter on making spars filled in the details.

So here is how I built the mast in a dozen easy steps:
2. Buy Materials

The original mast was shaped from a single piece of clear, quarter sawn Douglas Fir.  This was not available. I got 4 pieces of 20 foot 2x6 clear, quarter-sawn, kiln dried Fir.  I picked the four best from the warehouse.  About $500 wholesale!  Thanks to Disdero Hardwood Wholesalers for selling at a wholesale price!   While Titebond 3 wood glue would have likely sufficed, in consultation with the chemist at System Three epoxies, I decided to use their Gel Magic gap filling epoxy.  This meant I would not have to apply too much clamping pressure, possibly gluing stresses into the wood that might cause the mast to bend as would was removed to taper it.   Thanks to System Three and Woodcrafters for their contributions!
4. Work Support and Initial Measurements

The next week the glued up 20 foot long 6x6 was muscled outside, down to the barge and into the Steamer’s unheated engine room next to the boiler where it would be shaped over the next few months during my Wednesday volunteer shifts.   I made a work surface of six saw horses of heights that allowed for the camber of the steamer’s main deck.  They were eventually spaced to accommodate the full 32 foot length of the mast and connected together with lengths of scrap wood to be made rigid to one another.   A longitudinal glue line marked the centerline of two sides, and a centerline was snapped and scribed for the other two sides.  The mast height and diameter was marked for every foot on all four sides, and the diameter lines were connected.
9. Taper to 32 Sides and Sanding Machine

The tapering to 32 sides was done by eye with a smoothing  plane.  Then MacIntosh’s sanding machine that used an inside out sanding belt powered by a power drill turning a rubber coated drum was employed to obtain a smooth cylinder shape. Additional cuts were made to accommodate the steel sleeve that slips onto the top of the mast and holds the sheave assembly.
​10. Rot Prevention

In order to slow future moisture and rot problems the bottom and top of  the mast and the sheave assembly were soaked in System Three S-1, a penetrating epoxy, cracks at the base were filled with epoxy paste, and the entire mast was primed and then coated with a white epoxy paint long ago donated to the Museum by Chevron Shipping Company.
​11. Hardware, Sheaves, and Halyards

With the help of Portland firefighters the mast was carried up to the Texas Deck of the steamer where hardware and halyards were applied and preparations made to step the mast.
​12. Stepping the Mast 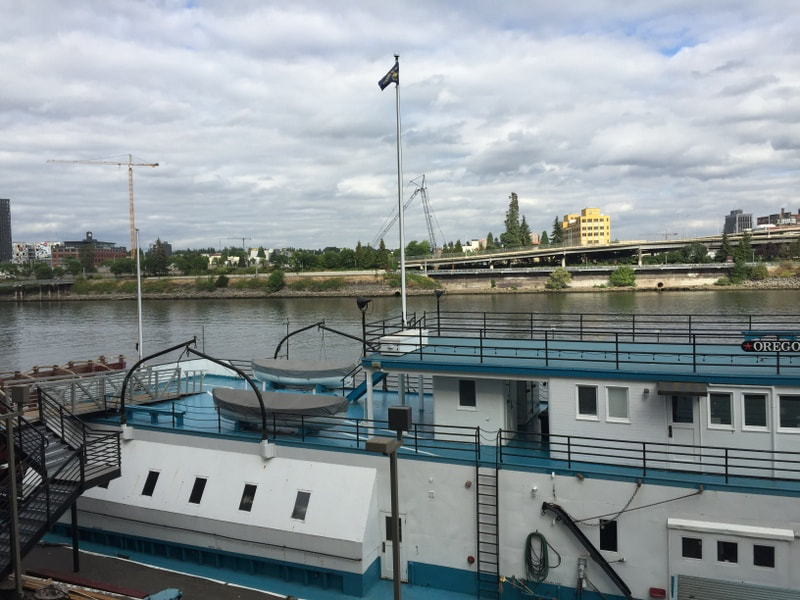